New Zealand’s pacer, Mitchell McClenaghan, does not believe Pakistani cricketers and supporters should be criticizing New Zealanders for canceling the two-nation trip.

The Kiwi pacer reacted to veteran Pakistan cricketer Mohammad Hafeez in a tweet that has since been removed, after Hafeez criticized New Zealand’s cricketing officials on Saturday when the Kiwis flew out of Pakistan claiming a “security alert.”

Hafeez took to Twitter to say, “Thanks to the security of the Pakistan forces [who made] arrangements [for] @BLACKCAPS to reach [the] airport safe and sound. Wonder same route and same security, but no threat today???”

He shared a picture of the New Zealand cricket team and staff at the Islamabad airport, departing the country. 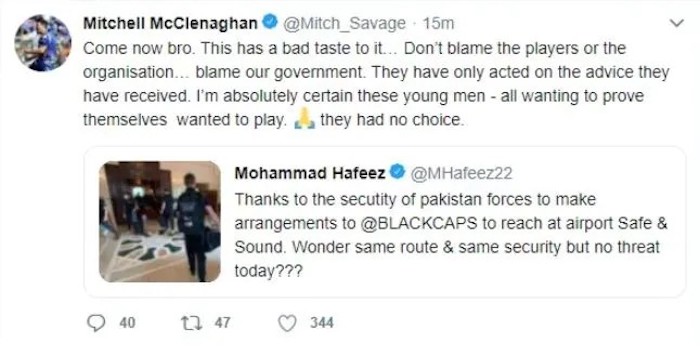 The blame for the tour cancellation, according to the 35-year-old McClenaghan, lies with the New Zealand government, not NZC or the players.

“Come now bro. This has a bad taste to it… Don’t blame the players or the organisation… blame our government,” McClenaghan said on his Twitter handle, now a deleted tweet.

He added, “they have only acted on the advice they have received. I’m absolutely certain these young men – all wanting to prove themselves wanted to play. they had no choice.”

The New Zealand Cricket (NZC) board dropped out of the much-anticipated trip on Friday, just hours before the first ODI match at the Rawalpindi Cricket Stadium, citing a security alert from their government. Despite assurances from Pakistani officials that the squad would be safe, the series was canceled.

New Zealand Cricket’s decision to withdraw its players from the series was a “unilateral” move made by the Kiwis without contacting the PCB, according to the PCB.

Thanks to the secutity of pakistan forces to make arrangements to @BLACKCAPS to reach at airport Safe & Sound. Wonder same route & same security but no threat today??? pic.twitter.com/mwxq6AFjyT

SBP to issue a statement about policy rate today