Babar Azam, the captain of Pakistan, appears to be on his way to dethroning Indian captain Virat Kohli as the best ODI batsman in the world.

During Pakistan’s match against South Africa on Wednesday, Babar Azam, the blue-eyed boy of Pakistan cricket, is predicted to surpass Indian captain Virat Kohli to become the top-rated ODI batsman in the world. Despite the fact that the ICC is yet to release the rankings, the country has already begun its celebrations.

Azam required 70 or more runs in the final ODI against South Africa, according to cricket statistician and journalist Mazher Arshad, to dethrone Kohli from the top spot.

Babar Azam had actually become number one in the ICC ODI Rankings on April 2 (after his 100 in the first ODI) but dropped to number 2 again after the second ODI. Rankings algorithm is based on many factors, my rough guess is today he needs APPROX. 70 runs to be number one again.

When the ICC ODI batsmen rankings are next revised, Azam, who is currently at 852 points, five behind Kohli, is predicted to score six points for the series against South Africa — with his hundred in the first game and 94 in the third — putting him ahead of the Indian superstar cricketer. Kohli currently holds the top spot in the un-updated rankings.

In the third One-Day International, the Pakistan captain did all he could to not only dethrone Kohli, but also to help his team put up a formidable total against South Africa. 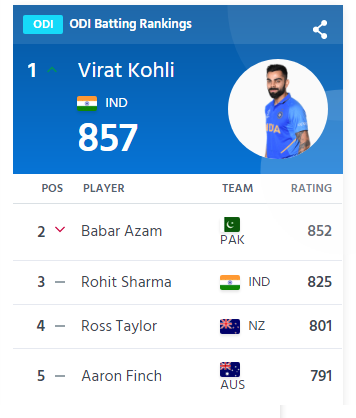 Babar missed out on a century in the match, but his contribution helped Pakistan reach 320-7 in their allotted 50 overs.

He led his team to a 28-run victory by scoring 94 runs on 82 pitches. Azam’s success in the third ODI earned him the man-of-the-match trophy, as Pakistan won the series 2-1.

But Netizens felt there was no better way to celebrate than memes!

Pakistan and South Africa are back in their regular kits today#SAvPAK pic.twitter.com/uWwoReSvpy

Once a kind always a king
No.1 odi Batsman #BabarAzam pic.twitter.com/Fzzh1nYYX6

#BabarAzam presenting you NO 1 odi batsman

How it's start. How it's going pic.twitter.com/5wTEkeMBbz

Ladies and Gentlemen Presenting to you a Number 1 ODI batsman in #ICCRankings😘😍 Absolutely A Great tO watCh#ICCRankings pic.twitter.com/jK9NquKh3b

Alhumdulillah, this series win is for you Pakistan. Extremely proud of this champion team. Special shout out to @FakharZamanLive his remarkable innings. Well played @OfficialCSA. #SAvPAK pic.twitter.com/xsOaQzQ32t

One user also made a montage for the king, Babar Azam.

A Lot of You Asked me to make an Edit on Babar Azam, so here it is😃

And the best cover-driver in the world of cricket, all agree.

If You Don't Like Babar Azam's Cover drive then you better consult a doctor#BabarAzam #PAKvSA pic.twitter.com/h46R8bZ5Hr

The ICC, cricket’s global governing body, has yet to announce the latest ODI player rankings. In the new rankings, Babar is predicted to have a one-point advantage over Kohli.

Corona continues to take its toll, 98 deaths reported in Pak